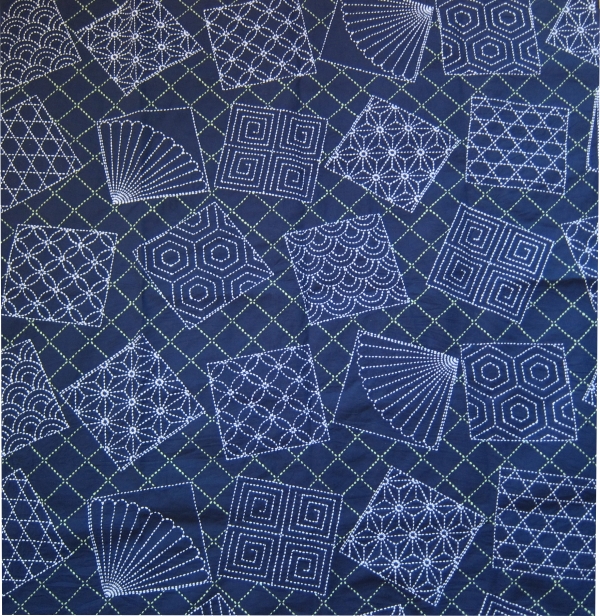 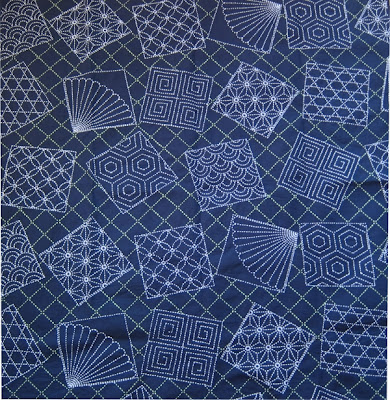 Finally! My Sashiko cloth is finished. The designs were already printed on the fabric which I purchased in St. John's, Quilt Canada, 2008. I certainly enjoyed stitching it as I didn't have to concentrate on following a paper pattern or count threads. In this pattern, the cross hatching, which I did in a green thread, went through the squares. However, I felt this was a bit too busy and opted to have them end at the blocks so that the blocks appear to float above the grid pattern.

Now I'm looking for a piece of black sashiko fabric at least 25 x 45 as I would like to do a top for my coffee table. Finding a source for the black fabric other than some of the Asian countries or Australia & New Zealand, is a challenge.
If you aren't familiar with this kind of embroidery, check out the following sites:
The Origin of Sashiko
Studio Aika
Sashiko Flickr Group
Tutorial from Sashiko Stitchers

I own a number of excellent books on this topic:

The Ultimate Sashiko Sourcebook by Susan Briscoe
Sensational Sashiko by Sharon Pederson
Sashiko by Mary Parker
Sashiko, Japanese Traditional Hand Stitching by Ai Takeda
Sashiko and Beyond by Saikoh Takano
Sashiko - Traditional Japanese Quilt Designs by Nihon Vogue
Paradise Stitched by Sylvia Pippen
For some reason, when this post is viewed in Internet Explorer, two photos of the same thing is showing. I had this problem before and it took quite awhile to correct.