On July 1, 2011, Canada celebrates its 144th birthday! This year is a special one as Their Royal Highnesses, Prince William and Catherine, The Duke and Duchess of Cambridge, will be in Ottawa, Canada's capital city, as part of their Royal Tour of Canada. You can check their itinerary here. Last year, Ottawa was host to Queen Elizabeth and Prince Phillip on Canada Day. Will there be more Royals next year to make it three in a row?
As usual, I found some projects to go with the Canada Day Theme.
Check last year's freebies here. I also found a couple of other projects to add to the list:
12" Maple Leaf Block
Table Runner Idea
Canada Day Bib
T-Shirts
This next project is called Royalty Block - quite fitting for our Royal Visitors. However, instead of using the American theme fabrics, try colours from the new Prince William Flag which will be flying in Ottawa tomorrow to honor the prince. The flag sports his personal red, white, blue and gold banner featuring a wreath of maple leaves and a cursive W.

Posted by Judy Cooper Textile Artist at 10:18:00 PM No comments:

Every Cloud has a Silver Lining won the Viewer's Choice Award at the Quilts from Pigeon Inlet Quilt Show last weekend. This piece was hand appliqued and hand quilted by Joanne O'Brien. It was a block of the month quilt (pattern by Aie Rossmann) which she started in 2004 or 2005. Joanne made about 12 blocks (three each month) and then proceeded very sporadically until spring 2009 when she spent two weeks in hospital because of a heart problem. During this time in hospital, she worked on the 'heart' blocks and completed most of them. When the guild decided to have the quilt show, she decided that this quilt would be ready.

Joanne said that 'working on the quilt helped me through the past two years - thus the title of the work Every Cloud has a Silver Lining. 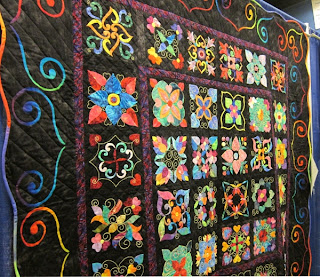 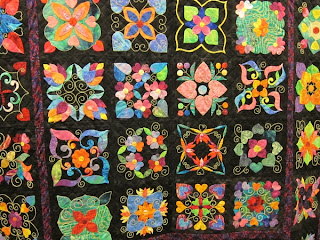 Here are a few more quilts from the Pigeon Inlet Quilt Show. 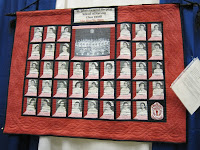 The first piece is called The Way We Were. It was made for the 45th Nursing Reunion from the St. John's General Hospital School of Nursing in memory of a class mate who had died. A few years ago, my husband and I did the photo reproduction and digital imaging for the quilter. 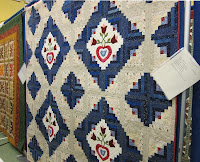 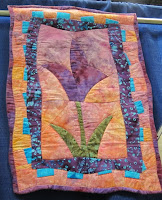 Posted by Judy Cooper Textile Artist at 10:06:00 PM No comments:

Today I visited the Pigeon Inlet Quilt Show, Bay Robert's, NL.
There were over 200 exhibits, quilting demonstrations, vendors, and tea room. The quilters certainly had a great show of quilts, some garments and smaller quilted pieces.
I took a few photos and permission was given by the individual quilters to show some of them here. I will post more at a later time. Visit the Pigeon Inlet Quilters' Guild on Facebook here. Check out their photos! 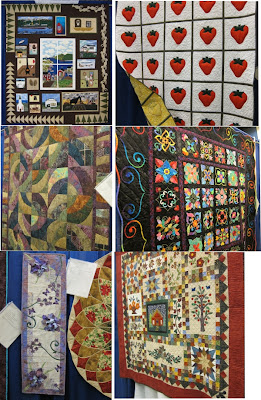 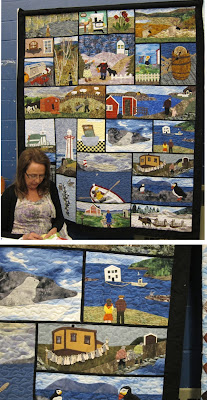 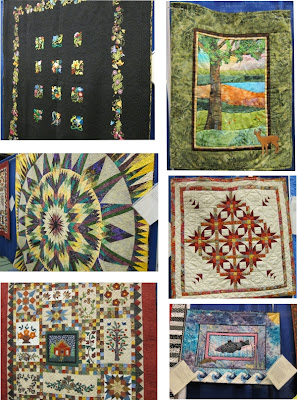 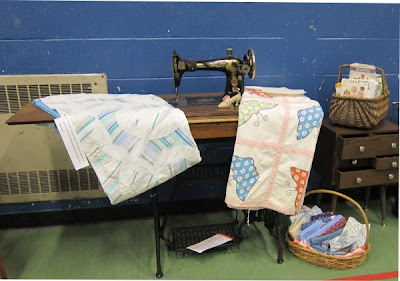 Posted by Judy Cooper Textile Artist at 8:51:00 PM No comments:

Stitching in the Sun

For all the embroiderers out there, here is a very interesting site called Stitching in the Sun. I wish I was stitching in the sun at the moment as it's pouring rain and cold outside. Tomorrow is suppose to be the first day of summer. Around here, it feels as if fall is creeping back instead. However, on that note, my garden is doing well.

To get back on topic, Daniela is working towards her Level 3 Certificate Embroidery with Sian Martin's Distant Stitch Course. I decided to go back and revisit her earlier posts. She certainly is doing a great deal of experimenting/work for this course. Very inspiring!

Email ThisBlogThis!Share to TwitterShare to FacebookShare to Pinterest
Labels: City and Guild's course, embroidery, Stitching in the Sun

Summer is Around the Corner - I hope!

This has to be a Spring for the record books! I can count on one hand the number of sunny days we've had here in St. John's. The rain, drizzle & fog is great for the plants but enough is enough. Sunshine is in demand. Summer will be officially here next week. With that thought, here are some things I found for those summer days:

This year, Quilt Canada was held in London, Ontario. Ninety-four quilted pieces were juried into the show. To see the winners, go here. See the Trend-Tex Quilters Challenge here.
Quilt Canada 2012, Seams Like Home,  will be held in Halifax, Nova Scotia.

Posted by Judy Cooper Textile Artist at 9:10:00 PM No comments: