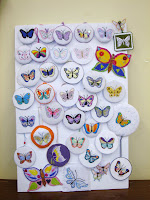 Back in October, 2009, I wrote about The Butterfly Project that the St. John's Guild of Embroiderers' was involved with. Well, here is a picture of the butterflies collected to date. If you look back in the blog, you will see that we have added to the collection. Some of the round ones on the top row and two on the second row were embroidered by members of the youth guild.
Check out some free embroidery butterfly patterns:
butterfly
butterfly redwork
Coats and Clark pattern for a butterfly place mat, napkin and napkin ring
cross stitch butterfly pattern
black magic butterfly
butterfly and bluebells bookmark
Posted by Judy Cooper Textile Images at 9:25:00 PM No comments:

My sister gave me a very handy gadget for Christmas - The Slipper. It is a soleplate attachment made from a "durable space-age material" (looks like silicone to me), which makes ironing safe for every fabric. The non-stick material glides over all fabrics. I tried it on delicate fabrics using the highest setting on my iron and it works!

This gadget was designed by Joanne Klassen and is distributed by:
Little Foot, Ltd.
PO Box 1027
Chama NM 87520

I couldn't find any mention of it on the web so if anyone comes across a website for these, I'd appreciate hearing about it. 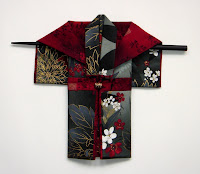 At the November meeting of the Eastern Edge Quilters, three of the members demonstrated how to make Japanese Kimono Ornaments. It was a very enjoyable evening. Permission to do this was granted by Ursula Riegel, the designer. Have a look at her patterns.

I made seven of these ornaments. This particular one was given to my friend, Judith, in British Columbia. Each of my 'mini guild' friends received one for Christmas.
Posted by Judy Cooper Textile Images at 9:56:00 PM No comments:

My blog has been listed on the Newfoundland BlogRoll, which is specifically set up for all NL blogs and web sites. Take a look as there are lots of things to see.
Posted by Judy Cooper Textile Images at 9:18:00 PM No comments:

One question that I am frequently asked is how I started doing fabric art. Well, here goes! Ever since I can remember I've always been interested in doing things with my hands. My maternal grandmother taught me to knit. I enjoyed playing with dolls and would stitch up wardrobes for them from scraps of fabric. As I got older, I made my own clothes. I have tried most fabric crafts and finally became interested in quilting, and hand embroidery.

In 1995, the school where I was teaching, St. George's Elementary School, Conception Bay South, was contacted by St. George's Church of England School in Bristol, England. They wanted to correspond with a school in Newfoundland with the same name. Since 1997 would be the 500th. anniversary of John Cabot's discovery of Newfoundland, they wanted to get a head start on the celebrations. As the library resource teacher, I decided to take on the task. For two years, we sent letters and pictures back and forth. The school was quite close to the shipyard where The Matthew, a replica of John Cabot's ship, was been built. We even received shavings from the ship as well as photos showing the various stages of its construction. In fact, CBC radio set it up so that we could speak to the students and teachers in Bristol, England.

Both schools decided to exchange gifts when the ship was to set sail. Since this was to be quite a momentous occasion, I decided that I wanted to do something special too, but what?

I finally decided to design and create a wall hanging to commemorate the sailing of The Matthew across the ocean. This was really my first attempt at design other than clothes making. Little did I know where this would eventually lead. I decided to make a 3-D sailing ship and trace its path from England to Newfoundland. The piece was a combination of hand and machine stitching, and computer technology. I called the piece 'Voyage of Discovery' and this label was printed on cotton from my computer. The ship was a challenge as most pictures I found didn't work. Frustration was starting to set in until I discovered the perfect picture on a case of Newfoundland made beer. It gave me just the right amount of detail for the quilted piece. The sails were made from white silk and slightly stuffed. The masts were toothpicks. At the time, I made two identical pieces, one to send and one to keep. I made a smaller version for my school as wall space was limited.

On the day The Matthew set sail, the wall hanging was presented to the school by friends who traveled to England for the celebrations. A colour photo of the children from the school holding the piece was on the front page of the newspaper in England! When the ship finally docked in St. John's harbour, a presentation of gifts from Bristol, was made by the captain to myself and several students who had participated in the twinning of the two schools.

I retired from teaching that same year, 1997 and the rest of what I do is history!

I've been watching various vidcasts on Bonnie McCaffery's web site. They are worth watching! The 2009 International Quilts at Houston were spectacular.

I also watched Terry White demonstrate 'beading by machine'.Terry has a book out called Thread Painting Made Easy which can be seen on her web site. Also check out her YouTube Videos.

I have spent a good portion of the day on the web. Check out some of the blogs I've joined.
Posted by Judy Cooper Textile Images at 8:50:00 PM No comments:

Out of the Blog

I just received the latest issue of the Craft Council of NL newsletter. I got to the second last page and read the title, Out of the Blog. I just glanced at the pictures and wondered why my friend's cathedral window was there. Taking a much closer look, discovered the page was all about my blog. It's nice to receive a surprise like that!

I just found this very interesting site on Valerie Hearder's Landscape Quilt Group called Tag Galaxy. I typed the word quilts into the box (enter initial tag) and it indicated that there were 50318 quilt photos to view. The globe filled with photos. Click on a photo to see each one. To rotate the globe, put the cursor on it and hold down the left mouse button. Click the arrow on top to see lots more photos.

I also typed in St. John's, Newfoundland and found lots of pictures.
Give it a try! You never know what you will find.
Posted by Judy Cooper Textile Images at 6:33:00 PM No comments:

This posting is for my quilt buddy, Anne! Last evening at Eastern Edge Quilt Guild meeting, Anne was one of the program participants who showed us her lovely Christmas present of marvelous fabrics. However, getting a new stash of stuff meant getting organized all over again. Anne's presentation of how this was happening at her house, was very entertaining. Anyway, Anne, here's a site called Today's Creative Blog to help give you more ideas. The Domestic Diva shows a way to organize fabric too and there are a bunch of links for organizing your sewing room and craft supplies at Tipnut.
Happy Organizing!!
Posted by Judy Cooper Textile Images at 2:01:00 PM No comments: 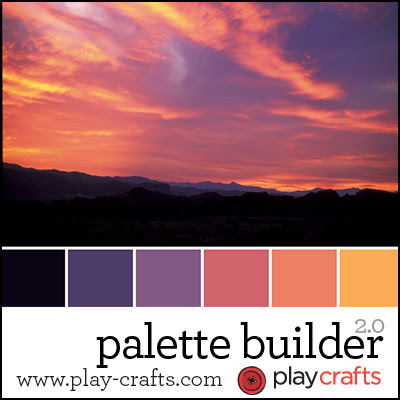