The Tokyo Quilt Festival just opened its doors! According to what I've read, this exhibit is one of the best quilting events on the planet. The work displayed is unique in every way. Too bad it's so far away but we can all get a glimpse of some of the quilts from Okan Arts blog. More photos HERE, HERE and HERE.

Today, the Credit / Business Card Holders were finally finished. More Shimmer Ornaments were also stitched out on the machine. AND, I walked 6 km at the LCLC's indoor walk area.

These 'Holders' will be going with me next Tuesday, to Newfoundland and  will end up at the Devon House Gift Shop.

I just realized that it's been over a week since my last post. No, I'm not going to apologize! Life sometimes takes over. We have been working on a few new shimmer ornaments but three of them are an exclusive request for one of my buyers so no one sees them until things are finalized.

The Credit Card Holders are half completed. They would have been done today but schools were closed here due to slippery roads and Gale decided she wanted to hang out with grandma. We made a snowman, hugged a tree (Gale asked 'why' and I said 'because we can'), played with Lego blocks, watched a show . . . We had lots of laughs.

The Credit Card Holders will be taken to Devon House at the end of the month as I'm making a visit to St. John's on the 29th of January for a few days. I hope the weather cooperates as I also plan to attend the January meeting of the St. John's Embroidery Guild on the day I get there.

Where does a day go? Between my gopher job (which is intermittent - renos on new place), domestic stuff, and dance class (not me, Gale), time flies!  BUT while waiting for her, I walked 2.5 km around the indoor track at the LCLC. Then everyone was back here for supper.

I did manage to finish up free-motion stitching a few more pieces for the Credit Card Holders. Here's a sample. On the right side is the  embellished fabric. It is difficult to see the glittery threads and yarns used. I will be taking some of these with me for Devon House, on my trip back to NL at the end of the month. 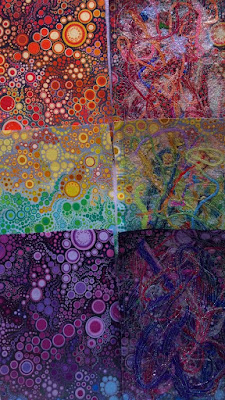 I've linked up with The Needle & Thread Network this week.

I have been making progress on my credit card holders but nothing to show yet. Since I gifted my Snow Happens hand embroidery / quilted piece to my sister, I've traced out another one to stitch. This will be a piece to do in the evening or when I go out. I don't expect to finish it quickly. My puzzle is coming along. I only work on it in the evening and then for a short period of time as it was taking over my free time. It's covered up during the day.

New Shimmer Ornaments are in the works!
I want to do more framed art . . . new studio first as I need the space to work.
An on-line shop is planned for 2018.

Now for some links:

Yesterday was a wild and woolly one with the wind and rain.  We didn't lose the power and the storm wasn't as severe as predicted. I expected to wake up to lots of snow but we got none of the white stuff.

Now that the hype of the winter storm is over,  I can now concentrate on making a few Credit Card Holders and Shimmer Ornaments. Not much else is going on except for taking down Christmas ornaments and packing them away for another year.

Check out a few links:

Fingers crossed that we don't have a power interruption!  We are getting lots of rain at the moment with high winds. I did get to the post box this morning and was surprised to finally get my 3rd Christmas book, Stumpwork Embroidery by Helen Richman. What a lovely book!

The book gives practical advice on working with threads as well as how to stretch and prepare fabrics. There are over 900 coloured photos to guide you through a wide range of decorative and raised stitches. Detailed instructions are included on combining stumpwork with a range of other techniques to create unique designs. Helen has provided ten projects to show how to use the stitches in designs, including stumpwork human figures. Don't you just love the figure on her book! 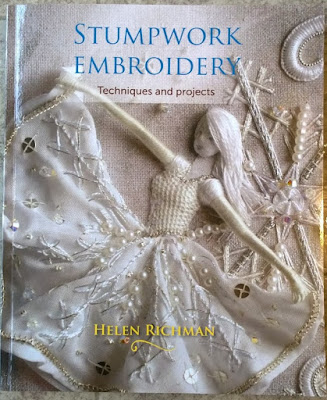 Getting Back to Work - SLOWLY!

In December, I bought myself a 2000 piece jig saw puzzle. Yep, nuts for sure! I haven't done a puzzle in over 20 years. Lots of them got done at our house as children. So, I set this one up and have been working on it over the holidays. I needed to get away from hand / machine work for awhile. I'm ready to get back into the grove of creating again. However, the puzzle 'Moose Be Done'. I copied that phrase from a magnetic note pad my granddaughter gave me.

I just love the bright colours in this puzzle. 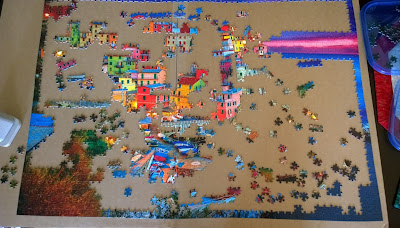 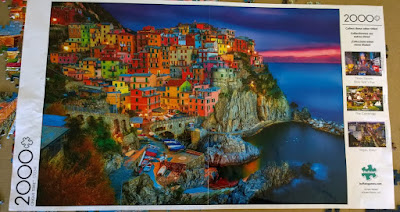 My first project will be more Credit Card Holders. See a few HERE.  I purchased some vibrant coloured fabric a few days ago to use for these. Most of my fabrics are inaccessible at the moment, so what is one to do BUT buy more fabric!

The sunset tonight was gorgeous as we were driving home from Halifax.! Just had to share it. 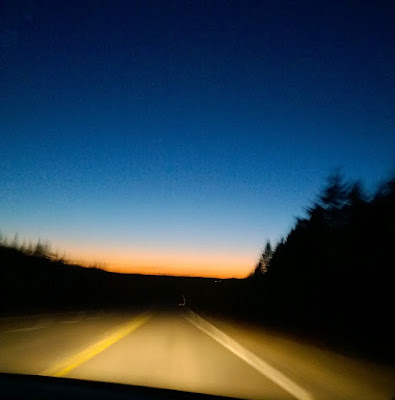 The weather across the country is very cold so now is the time to work on winter projects. Have a look at some of these BOMs for 2018:


Christmas isn't Christmas unless there is at least a new book or two! I received two with one more on the way.

Hazel Blomkamp's book, Needle Lace Techniques for Hand Embroidery, was added to my library. I do like the new book format. Check it out HERE. 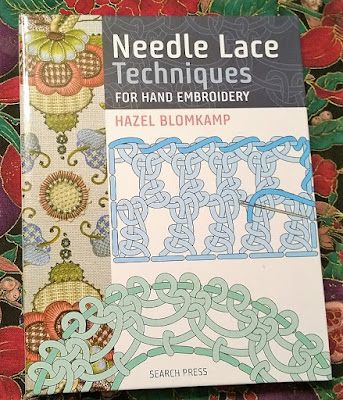 The second book is Inspirational Kantha by Anna Hergert.  To find out about Kantha, check  HERE. 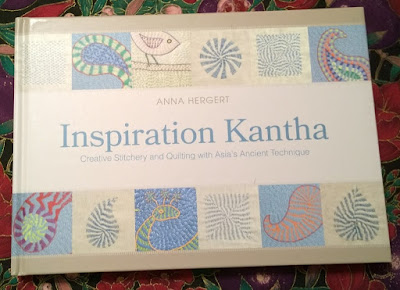 I'm hoping to get some free time soon to sit down and explore both books.