Yesterday, my daughter, Jill and I attended the Craft East Buyers EXPO in Halifax. This show was formally known as ACTS, Atlantic Canada Trade Show. I've attended this show twice as part of the Newfoundland and Labrador wholesalers. Since the format has changed considerably, I decided to check it out. This event, which was held in a downtown hotel, wasn't open to the public as it was a wholesale show for buyers.

We visited just about every booth and chatted with the makers. Some had their displays in a suite at the hotel while others opted to set up in several large rooms with other vendors. Four floors of the hotel were taken over for this event.

There was lots of interesting art and craft to see. Many of the vendors were new this year, but I did speak with many people I've met over the years.

Here's the vendors from Newfoundland & Labrador:
I do have to share one vendor from Nova Scotia as their business cards for this event was very innovative.  Have a look: 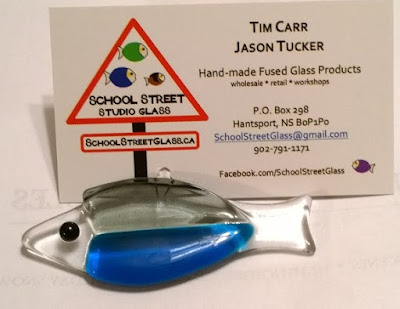